30 Celebrities Who Completely Changed Their Look by Going Platinum 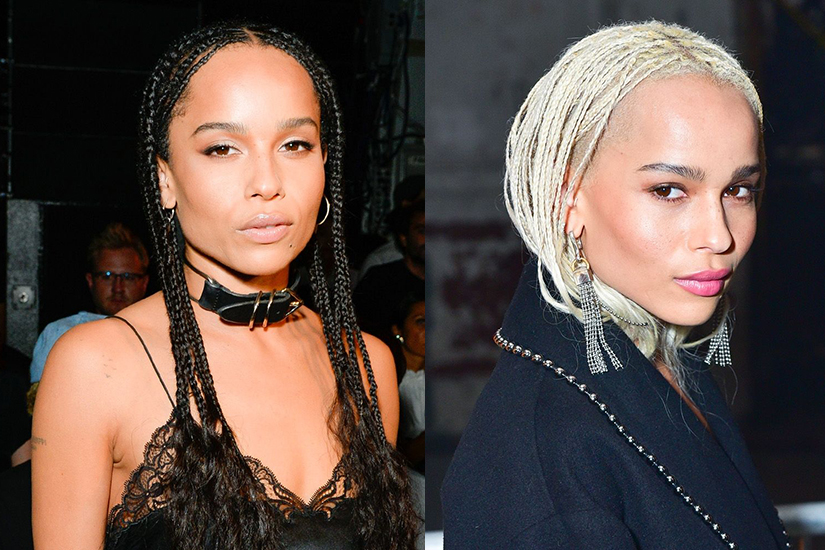 Zendaya swapped her signature brown wavy hair for a sleek platinum pixie at the British Fashion Awards in December 2017. While the look was just a wig, it’s not the only time the star has tried blonde hair for a night. She’s worn blonde bobs and pixies previously at events (all wigs).

Gomez sported brunette locks in October on the set of her upcoming film with Woody Allen, but the star debuted her platinum look at the American Music Awards just a few weeks later. After spending nine hours in the salon, she’s not planning to change the color any time soon, she told E! News.

The French starlet debuted her new look in Milan in September. She has famously stuck to being a brunette, Harper’s BAZAAR reports, so the change came as a shock to fans.

The iconic brunette went platinum on Instagram on November 30th. The look appears to have been just for social media, as she’s been back to brunette since posting.

The House of Cards star debuted her blonde bob in August 2016.

The Oscar winner went from auburn to platinum earlier this year, revealing her new ‘do at the AFI Life Achievement Award Gala Tribute in June.

The triple threat proved he can pull off more than one shade in June 2016, just in time to promote his summer hits Mike and Dave Need Wedding Dates and Neighbors 2: Sorority Rising.

She quickly went blonde in October 2016, with an Instagram debut, but switched back to brunette that same month.

In yet another Instagram reveal, Orlando Bloom went from brunette to platinum in September 2016, giving us throwback vibes to his Lord of the Rings look.

The singer revealed his platinum metamorphosis in December 2015, just as he began dating Gigi Hadid.

Our January cover star revealed her platinum look on Instagram in 2016. She told Vogue that maintaining the color requires a religious combo of Olaplex and coconut oil.

The Grammy winner debuted her platinum style during NYFW this past September. She originally showed off the color with long blonde braids, Refinery29 reports, but then surprised fans with a photo of her blonde afro on Instagram.

Kristen Stewart debuted her daring blonde style at the premiere for her drama Personal Shopper, in March. She went from a dark brown cropped cut to a bleached buzz courtesy of stylist Bridget Brager, Fashionista reports.

The singer and actress posted an Instagram in August, featuring her platinum switch-up (a wig, it’d be revealed later). She followed the bombshell with a video of her singing to Taylor Swift’s “Look What You Made Me Do.”

Miles Teller unveiled his total transformation (including eyebrows) at the 2016 ESPY Awards, and as E! reported, Twitter had a meltdown. The star responded after reportedly dying his hair for his role in Only The Brave (per the DailyMail), by apologizing to the internet.

Hair chameleon, Kylie Jenner styled her Versace gown for the 2017 Met Gala with a platinum blonde bob. She explained the choice on an episode of Life of Kylie. “When donatella [sic] wants you to go blonde .. you go fucking BLONDE ??,,” she captioned her Instagram.

The reality star went platinum in September, but it wasn’t her first time as a bleach blonde. She also made the switch during Paris Fashion Week in March 2015, but it only lasted for three weeks.

West took a style cue from Kim and went platinum in during NYFW in February.

Cindy Crawford’s daughter and supermodel-on-the-rise dressed up as a ’70s bombshell for Halloween this year. She accessorized her platinum wig with baby blue eyeshadow and a slinky disco top.

The singer and actress went platinum (and wore a wig) when she played the iconic role of Motormouth Maybelle in the 2016 performance of Hairspray Live!

Just a few weeks after the 2015 Oscars, where he presented the award for Best Supporting Actress, Leto once again proved himself fearless when it comes to hair transformations. He chopped his long brown hair and shaved his beard in favor of a slicked back platinum style.

One of the most long-awaited platinum transformations ever, Clarke finally debuted white blonde hair on Instagram in September, channeling the mother of dragons IRL.

The singer went blonde at the beginning of this year, revealing her new color at an NHL game.

Hadid showed off her platinum hair (likely a wig), styled by Sam McKnight, on Instagram in June 2016. She didn’t keep the color for long, sporting her natural brunette locks when she walked in Givenchy’s Spring/Summer 2017 menswear show a few days later.

The Girls star stepped out with platinum hair in February after years of rocking her natural brunette tone. “It feels like it is just a new twist on the same old me,” Williams told Allure. “It’s just hair! But it’s fun.”

The usually brunette model showed off curly blonde tresses on Instagram in March 2016, with the caption: “who says I can’t be a blonde?” Not us, that’s for sure. But, the look was just temporary. As the DailyMail reported, she stepped out with her natural color a day later.

The reality star initially started as a brunette but gradually went platinum in 2015. She’s since styled her platinum hair long and in a bob.

Stefani is naturally a brunette, though she’s been bleaching her hair platinum since she broke out in the industry. But the singer actually hasn’t used bleach on her hair since 2004, her hair stylist Danilo told E!, though she does touch it up every week. “I developed a high-lift formula that achieves the same effect but saves the quality of her hair. I did a lot of research and really looked at places of origins for blond hair color like Germany and Scandinavia. I’ve spent years finding and testing new lines and technology.”

Shortly after the Met Gala in May 2017, Dunham chopped her brown hair and dyed it platinum. She’s since worn a blonde pixie.

In a bit of a surprise move, Stranger Things‘ Dyer, who plays brunette Nancy Wheeler, went platinum shortly after the second season premiered. No word whether the color will stay in the show as they begin shooting season 3 but…

The actress on returning to Cannes, working with L’Oréal Paris and her top beauty essentials when travelling.