Hair stylist to the stars, including Lada Gaga, J. Lo and Scarlett Johansson, sits with ELLE to chat about his New York roots, celeb clientele and the products every woman needs to own now. 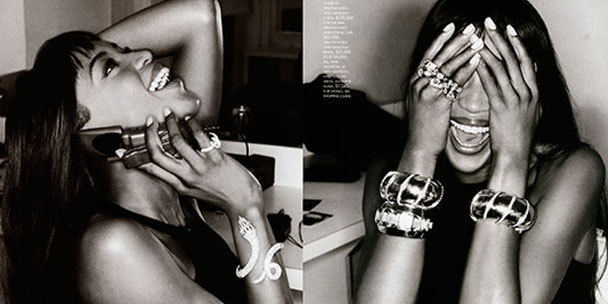 One of the world’s most successful hair stylists—with a head count that includes Lady Gaga, J. Lo, and Scarlett Johansson—Oribe strides into the room with an outstretched hand and the kind of grin that makes you want to confide everything to him over a gin and tonic. Then you notice his hair. It’s a perfectly sculpted silver that he likens to Desi’s style in
I Love Lucy. “I’ve been parting it in the same place since I was four years old!” says the most creative of hair artists, laughing.

Originally from Cuba, Oribe (pronounced
Or-bay) Canales emigrated to North Carolina with his family as a child. After beauty school, he settled in New York, where he opened his first salon in the back of Parachute, a store helmed by a Canadian couple. Its success led to a second location, which soon attracted the attention of the fashion industry’s leading lights. Oribe began working with photographers like Bill King and Steven Meisel, who shot for all the major magazines: ELLE U.S.,
Vogue,
Harper’s Bazaar. With Meisel and makeup artist François Nars, Oribe formed an unofficial partnership, earning his single-name moniker by creating hair looks for the most super of supermodels—
Linda Evangelista, Cindy Crawford,
Naomi Campbell. His ultra glamorous aesthetic (think: big hair, huge) won him fans like Diana Ross and Gianni Versace, with whom he collaborated on runway shows and ad campaigns.

In late 2008, Oribe launched an eponymous hair line—28 products that he designed to be “the Rolls-Royce of the hair world.” Yesterday, the master stylist sat down to chat with ELLE.

When did you first start noticing hair?

“When I was a kid, I was obsessed with old movies. I wanted to be an actor—I think I saw every black and white movie ever made. There’s a scene in
Barbarella, the opening scene, where Jane Fonda has the big astronaut helmet, she takes the helmet off and her hair just flies out. It’s so sensational. Another moment was Marlene Dietrich in
Blonde Venus—she comes out dressed like a gorilla and all of a sudden she takes the gorilla head off, and her hair pops out like a white afro. Amazing!”

So your first hair icons came from film?

“Certainly from films.
Cleopatra came out in the ‘60s, and oh my God, I’d never seen anything like it in my life. It was a mixture of the ‘60s look with geometrics — I thought it was just sensational. Alexandre de Paris did the hair, and I was just mesmerized by it.”

What does Oribe think about Cher, the Trinity (Linda, Christy and Naomi) and celebrity? Find out on the next page…

Above image of Naomi Campbell from ELLE Decemeber 2002.

You work with major celebrities, and you just created Cher’s hair look for her Vanity Fair cover. Do you ever get starstruck?
“Last week, my heart was pounding like I had just started doing hair. I did the Vanity Fair with Cher a couple of months ago, and I worked with her this week in New York, doing David Letterman and all the morning shows. She’s something. She’s like this Old World celebrity who knows what she wants. I was just listening to her the whole time [miming big eyes and nodding]. Celebrity now is so easy to achieve, but celebrity that’s really done something and has managed to survive for so many years is something else.”

You were a part of the rise of the supermodel, especially the Trinity: Linda Evangelista, Christy Turlington, Naomi Campbell. What are some of your favourite memories from that time?
“The timing of it was great. I was working with amazing photographers, like Steven Meisel, and the wonderful makeup artist François Nars. We were a team. These little girls—Christy at 14, Naomi at 15. I worked with Linda on her first shoot for American Vogue. She came on a go-see with her book, and, you know, it can be quite horrible—they bring the models in like cattle. But the editor loved Linda’s gums! She has these beautiful gums, and those gums got her to the stage where she was trying the clothes on. She tried the clothes on, and then it was her knees, these perfect knees. All of a sudden, Linda took over the whole shoot. And that shoot made her a superstar.”

Do you miss those days?
“I do, yes. Those girls were amazing. Walking down the street with Linda Evangelista with her platinum hair, it was like oh my God, like walking down the street with Marilyn or something. At that time, celebrity was a different thing. Movie stars were much more private, and the models were the women that got all the publicity. They got so powerful that it was the demise of them, because people would go to the fashion shows just to see the models, as opposed to the clothes. Some of the designers didn’t care about that, Versace, for instance. He just said ‘Make them look incredible.’”

Do you have a favourite of the Trinity?
“My favourite…oh I love them all. Turlington and I have a wonderful relationship. She has one of those freaky faces that comes around once in a lifetime, the proportions are perfect, and she’s super smart, and so funny, just an amazing woman, I love her so much. And I love Naomi too—Naomi’s like a little panther. She’ll strike at any point but she’s really a good girl, with a good heart. And Linda and I always had a great relationship—it was interesting, a very love/hate thing. I didn’t like it when she coloured her hair red, so to torture her, I would carry her hair pieces in a McDonald’s bag! And I would pull them out at the shows and she would get furious [laughing]. She’s one of the most professional models ever, she challenges you when she works with you. It’s always fascinating working with her.”

You’ve had your own salons in New York, and now you operate one in Miami. Why is it important to you to work on non-famous hair?
“Doing session work and working on movie stars—you live in a fantasy world. I like to take what I give to the magazines and incorporate it into the real world. In a sense, I’m super commercial—I take the craziness and somehow make it work on the streets. It’s nice to be in touch with the real world, and that’s helped me tremendously in developing the product line. I know what women need and what hairdressers need.”

How involved are you in the product line?
“I’m a Virgo, so I’m crazy about the details—the way a product pours, the look of it, the feel. We started the product line when the economy was different—we were building the Rolls-Royce of products, so I wanted everything to be very luxurious. What we ended up with was quality. Quality always works, no matter what. Women will spend the money if they get the results.”

Hair is such an emotional thing for many women—a good or bad hair day can define a mood, or a whole evening. What are your thoughts on the psychology of hair?
“A hairdresser can ruin your summer [laughing]. A hairdresser is very important of anybody’s life—for men too—it’s one of those things that you should always have. Hair is one of the first things that you see in a person; it can enhance you or destroy you. When I cut hair, I like to concentrate. You end up being a psychiatrist too, but I concentrate on the cutting, and then during the styling, I relax a little more. But I take it very seriously.”

For curly hair Curl by Definition ($54)

For straight hair Crème for Style ($33)

For more on Oribe’s amazing product line, visit oribe.com. Look out for his latest product, Masque for Beautiful Color ($66), launching in January 2011.