Get photo-ready makeup with tips from a red carpet authority

We may not have photogs following our every move, but even us mere mortals want to look good on film. We caught up with celebrity makeup artist and red carpet guru Amy Beth Duclos to get her tips for creating camera-ready makeup. Say cheese! 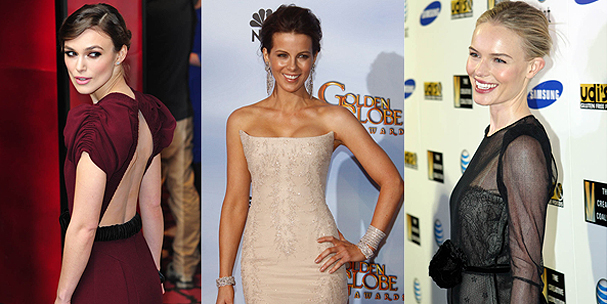 We may not have photogs following our every move, but even us mere mortals want to look good on film. We caught up with celebrity makeup artist and red carpet makeup guru Amy Beth Duclos to get her tips for creating camera-ready makeup. Say cheese!

Red carpet makeup tip: Prime time
“The key to remember when you’re going to be photographed is to really take your time on your skin,” says Duclos who warns her clients that any imperfection will be magnified on camera. “You want to create a flawless base.” Prep your skin by making sure your face is well moisturized. That’s because if your skin is dehydrated, fine lines and wrinkles will appear more pronounced in photographs. Follow a primer to give your makeup more staying power. “Use a primer to cut down on the shine that will show from a flash,” adds Duclos.

Red carpet makeup tip: Skin finish
To get that J-Lo glow, Duclos recommends mixing a drop of highlighter with either your moisturizer or cream foundation. “People want a glow and they think that means adding shimmer,” Duclos says. “You want to look like it’s coming from within, not like you’ve put heavy product on your face.” Duclos also recommends avoiding powders, which can be dull and don’t “create enough life on camera.” If you want to set your foundation, Duclos recommends opting for a loose iridescent powder instead of a pressed compact.

Red carpet makeup tip: Cheeky business
A cream blush with a sheer formula creates a dewy finish that Duclos says looks more natural on film then using a powder blush. “A stronger cheek looks best on camera,” says Duclos. “But you don’t want to look crazy in person, so let your blush set for a few minutes before building colour.” Avoid layering a cream blush on top of a powder (no one likes a cakey finish), and sweep colour from the apple of your cheeks up to your hairline to create a natural flush. For an added pop of colour, layer a bright pink or coral on the centre of your cheeks.
For more photo-ready beauty tips read on to the next page…

Red carpet makeup tip: Hard line
“Adding the right contour can give you an instant facelift,” says Duclos. Select a powder that’s two shades darker then your foundation shade to create definition without being too obvious. Blend the colour into your temples and along your cheekbones to create an lifted effect. “If you’ve a rounder face, contouring your jawline will create an elongated more oval shape,” adds Duclos. Choose a shade with a taupe base, avoid something that is too orange or grey which will look waxy on film (Madame Tussauds is not red carpet appropriate.)

Red carpet makeup tip: In the shadows
Duclos says that a smoky eye looks great on camera and suggests women use a shimmering eye shadow to contour their lids and make their eyes pop. Opt for shades that have a red or violet undertone; these shades will photograph darker as opposed to other shades (usually with yellow or blue undertones) that can get whited out with a flash. “People always think you need to use black in a smoky eye, but that actually closes the eye off,” says Duclos. Instead of using black, Duclos recommends an earthy trio (think espresso, bronze and champagne) to make the most photographic impact.

Red carpet makeup tip: Line up
“The key to eye liner is to keep it thin,” says Duclos. Choose a waterproof, long-lasting eyeliner to prevent creasing or smudging. If you want a sultrier eye, Duclos recommends using a pencil that you can blend outwards. If you prefer old Hollywood glamorous, opt for a gel or liquid liner for a defined line that will make an impact.

Red carpet makeup tip: Lip action
Before applying any lip colour, make sure your lips are well moisturized and exfoliated. Duclos recommends choosing a lip shade that has a blue undertone and tells clients to avoid neutrals that have a taupe or brown base. “My go to colours are Love Born and Syrup [M.A.C Cosmetics],” says Duclos. “They look good on everyone, like your natural lip colour but enhanced.”

Red carpet makeup tip: Lashes
“No one should ever walk the red carpet without lashes,” says Duclos. Even if you don’t want to do a heavy shadow, adding individual lashes to the outer corner of your eye will “amp up the look without being too heavy.”