With Génifique, Lancôme is changing the face of beauty, one precious drop at a time. 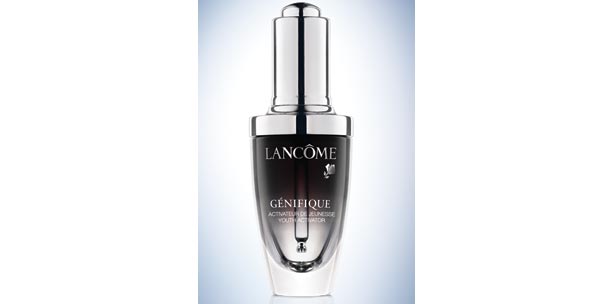 Lancôme is out to change the world of skin care with Génifique Youth Activator. The most modern science has gone into its development, with 10 years of research in genomics (the study of genes) and proteomics (the study of proteins), an even newer kid on the biotech block. Working with Quebec City’s Centre hospitalier de l’Université Laval (CHUL) Research Centre, which is internationally recognized in the field of medical research, Lancôme scientists have identified the proteins responsible for the appearance of youthful skin and found a way to activate the genes that contain the code for these proteins to create Génifique Youth Activator.

“It means genes, science and magic,” says Odile Roujol, president of Lancôme International, at the launch of the product in Paris. But beyond the rapture of her remark lies an understanding that consumers approach beauty in a very pragmatic way. “For the customer, the question is ‘What does it do for [my] skin?’” says Roujol.

“What you’ll see in the mirror is radiance, luminosity and even skin tone,” says Véronique Delvigne, director of scientific affairs for Lancôme. “Over time, you’ll also observe a transformation in suppleness.”

Designed to stimulate specific proteins that affect cells in the outermost layers of the epidermis, Génifique Youth Activator works quickly when used twice a day, morning and night. “In seven days, you’ll start to see changes,” says Delvigne. She also points out that, though it may be used in conjunction with other anti-aging products, the very light formulation of the liquid gel concentrate means that it works more efficiently when it’s applied first.

Because Génifique adapts to your particular needs, it can be used on women of all ages and skin types. “It’s a star product,” says Roujol, who compares it to other Lancôme breakthroughs like Niosôme, which was a pioneer in liposome technology when it was first introduced in 1985.

Besides technology, Génifique has the beauty and brains of Roujol herself behind it. As the president of Lancôme since 2006, and the first woman to occupy that position, she enjoys “speaking about seduction in a feminine way.” That’s why Génifique is called Youth Activator: She hates the combative ring of the phrase “anti-age.”

“We need positive thinking to give more elegance and femininity to the skin-care market,” declares the 41-year-old Roujol, who is wearing a beige Marni skirt, a black Yves Saint Laurent jacket and platform shoes. She maintains her positivity, even in the face of the economic climate that Génifique arrives in. “I would say that a crisis is a crisis,” she admits, quick to cite the motivational speaker’s understanding of the word, which interprets it as both risk and opportunity. “It helps us return to the brand’s roots — a product that is serious but creative,” she says.

Génifique fits the bill on both counts: It’s 21st-century science contained in an elegantly shaped bottle in gradient shades of Lancôme grey.