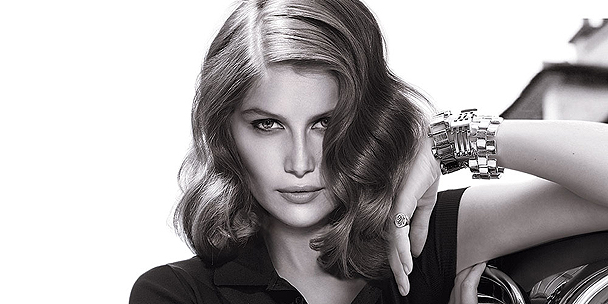 Laetitia Casta might seem like an unlikely choice to represent one of the world’s most all-American brands. After all, the former Victoria’s Secret model is best known for succeeding Ins de la Fressange as Marianne, the national symbol of France. But updating his conservative image with a dash of Gallic va-va-voom is just what Ralph Lauren was thinking when he chose the voluptuous 30-year-old as the face of Notorious, his newest fragrance. A departure from previous hits like Romance, the sensual oriental scent takes inspiration from the strong, sultry actresses of 1940s Hollywood, such as Lauren Bacall and Ingrid Bergman. And Casta – dressed in a chic black blouse and pencil skirt at the New York launch party – is surely their modern-day equivalent.

“I think it’s a good change in Ralph Lauren’s image,” says Casta, who modelled for the designer’s runway shows in the 1990s. “When I did [the advertising campaign], I felt like a character in a movie. Any woman could be this way – why not feel like a femme fatale sometimes?” That’s what perfumer Olivier Gillotin had in mind when he created the fragrance, which includes notes of pink peppercorn, vanilla, carnation and chocolate cosmos – a flower he discovered in Mexico two decades ago. “They give it this sensuality,” explains Gillotin. “When a woman wears this fragrance, she wants to be cuddled.”

And maybe that’s another reason why Casta – whose womanly sex appeal is set off by a hint of vulnerability – embodies this scent. “For me, to be notorious is to be mysterious and strong. Sometimes you can be fragile; that is part of being strong too.” It’s an outlook she has adhered to both personally and professionally since a talent scout discovered her on a Corsican beach in 1993. In the midst of a high-profile career (she starred in campaigns for Chanel and Christian Dior and was a muse to the late Yves Saint Laurent), Casta famously quit modelling at age 23. “I started to have my kids, and I didn’t want to be a doll anymore,” says the mother of two. Seeking more meaning, she also embarked on an acting career in her native France. “I wanted to give more emotion and have a voice.”

Though initially maligned, Casta is finally getting kudos as an actress, thanks to a leading role in Nes en 68 (Born in ’68), for which she won an award at a film festival in Cabourg, France, earlier this year. Ironically, her new film career has also helped her make a comeback of sorts in the modelling world. “They are using me more as a personality now than as a model,” she says. “I prefer it that way – I can give something more than just being a pretty face.” Still, she has no regrets about her previous choices, proving that self-confidence is, perhaps, her most alluring quality of all. “Everything [I’ve done] has made me who I am as a woman. For me, being sexy isn’t about trying to be sexy – it’s about being yourself.”