"It's just pictures that make me chuckle." 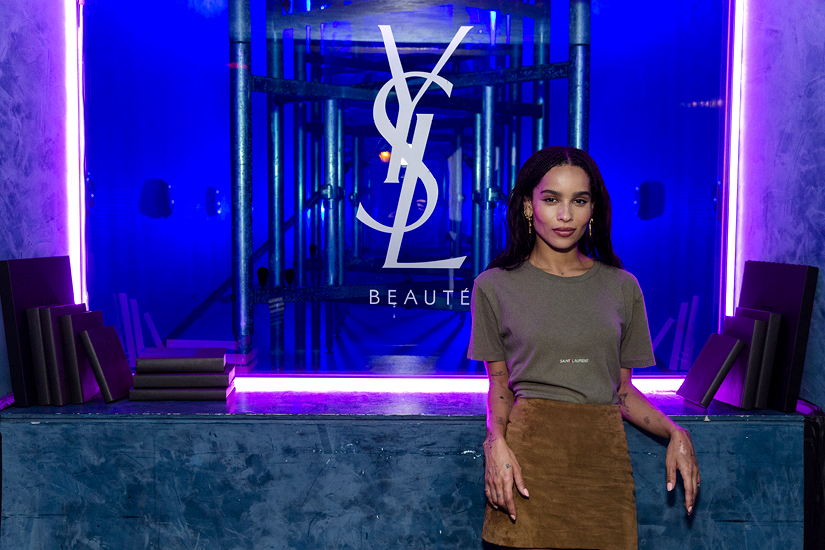 “Do you watch Mr. Robot?” I ask Zoë Kravitz. We’re in SoHo, Manhattan at the World of McIntosh Townhouse, which has been outfitted as the YSL Beauty Hotel for a two-day event during New York Fashion Week. The multi-level tech-y space was prominently featured in a recent season of the show, of which I am a fan. “I’ve seen a few episodes, I thought it was really good,” she tells me. “I’m bad at keeping up with shows.”

It’s understandable. Between filming the second season of the acclaimed “Big Little Lies,” press events for “Fantastic Beasts: The Crimes of Grindelwald” and a new gig as the face of YSL Beauté’s Black Opium fragrance, the 29-year-old actress has been busy. Here, we talk Harry Potter, meditation and her recent affinity for posting seemingly random images to Instagram.

If you had to think of a scent that your character, Leta Lestrange in “Fantastic Beasts” would wear, what would it be?

I feel like she would wear Black Opium. [Laughs] I do, I actually do.

Were you a Harry Potter fan before filming?

Yes! I read the books; I think it was the first book I asked my mom to buy for me and the first one I wanted to read on my own without it being a school assignment. It was just the first thing I wanted to cuddle up with at night and read. It really sparked my imagination in this amazing way.

What house do you think you’d be in? You yourself, not your character.

My character is Slytherin, but I don’t know, maybe Ravenclaw?

I feel like they are really overlooked. And the Hufflepuffs.

Same. You shot the Black Opium campaign video in Tokyo and Thailand, had you been before?

I had been to Tokyo; I had not been to Thailand.  I was really excited to go to both places, I love Tokyo, it’s one of my favourite places in the world. Thailand was amazing. The people there are just amazing and the food is delicious. We shot on one of the highest rooftops in Bangkok. It was pretty epic.


It has a bit of a party vibe to it. On a Saturday night, would you usually be out with friends or are you more of a homebody?

I am turning into more of a homebody. The thing I like about the commercial is it feels less about partying and more about adventure. What I love so much about living in the city is that you can kind of go with the flow. The character, she finds her people and goes out on the street and finds this dance party. It’s about going out into the night and finding this spontaneous [thing], whether it’s a party or a person or whatever it is.

I want to ask you about the Instagram series you’ve been doing. Well, I am calling it a series…

I think it is becoming a series. There is no real method to it. It’s just pictures that I think are so funny and absurd and I feel, for whatever reason, that they need just a moment of appreciation. That’s what I mean by “this is important.” Just take a minute and look at these. I don’t know! Just makes me chuckle.

OK last question. Do you meditate?

I don’t! I really need to. I try to just take three deep breaths and really sit and be quiet. And maybe that is meditation, in a way? But I think there is probably more advanced things I should learn how to do. I know so many of my friends that do it and it really helps them, especially when you are always on the move. Do you?

I try to but I always think I am doing it wrong, then I get frustrated and I stop.

Yeah but I even think that, you’re still doing the work. Because the reason you are getting angry is that you are actually challenging yourself. It’s good, we should all do it.