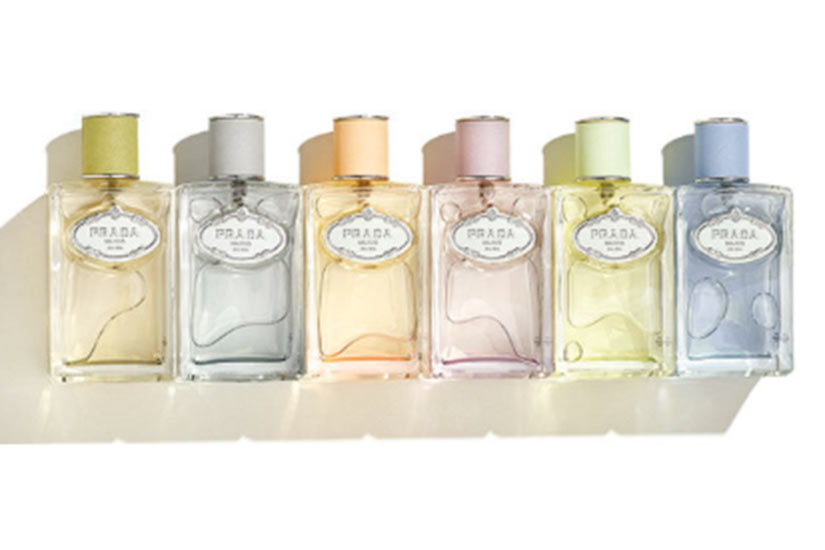 Before brands launch a fragrance, they tend to test it against other scents on the market. You would think they want to launch something unique, but typically they want assurances that their scent is similar, explains Emmanuelle Moeglin, global fragrance and colour cosmetics analyst at market-research firm Mintel.

“They want the fragrance to be noticed, but they don’t want it to be considered too disrupt­ive,” she says. “It’s a Catch-22.” Prada, however, prides itself on being anything but the status quo. “Prada is not as driven by consumer testing,” says Daniela Andrier of Prada Parfums. “There’s something free-spirited in its approach. It really goes for different things and has more of an identity.” Andrier is the award-winning nose respon­sible for many of Prada’s scent supernovas, including Prada Candy and the new launch of a range of six perfumes called “Les Infusions de Prada.”

Prada first introduced the “infusion” concept back in 2007, when it released Infusion d’Iris—a sparkling floral citrus that debuted as a captivating limited edition and instantly became iconic. Joining its return is an unusual and compelling group of fragrances, including Fleur d’Orange (orange blossom), Oeillet (carnation) and Amande (almond). Each imparts a gauzy, gossamer-light air to its wearer. “You have an impression of the ingredient, but you’re not overwhelmingly fragranced,” says Andrier. “There’s something very subtle yet very present; you can still smell the skin of the person wearing it.”

The future of modern fragrance may include a move toward niche perfumery, which hearkens back to the “root of perfumery” and focuses on high-quality raw materials. This collection certainly feels like an exclusive fantasy of nonconformist notes and narratives. “One of the beautiful things about working for a house of invention and creativity like Prada is that it has such respect and value for the story,” says Andrier. “It’s something people forget when making a fragrance: to tell another story that isn’t always the same.”