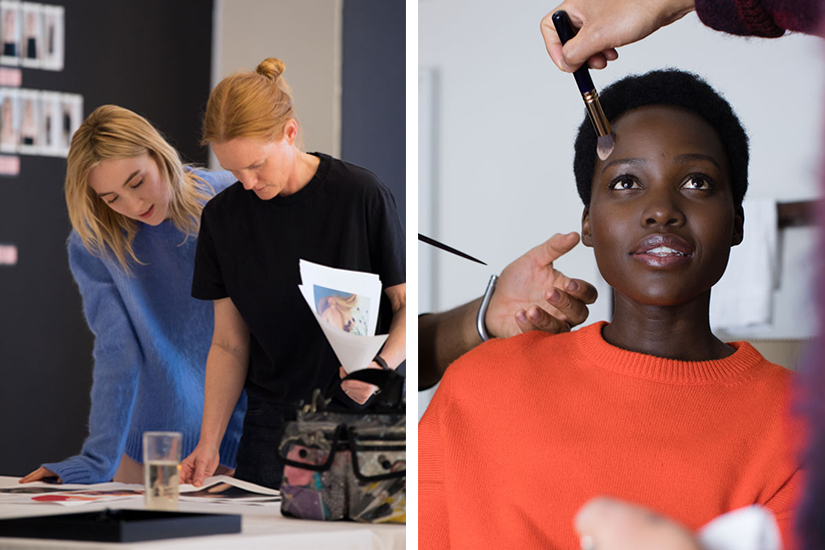 Lupita Nyong’o and Saoirse Ronan have a new gig. The actors were selected as the face of Calvin Klein’s latest fragrance, Women—the first new scent to be released under the creative direction of Raf Simons.

The campaign for the woody floral fragrance, available today, positions Nyong’o and Ronan beside women that inspire them: singer Eartha Kitt and actor Katharine Hepburn for Nyong’o, and actor Sissy Spacek and singer and civil rights activist Nina Simone for Ronan.

“The campaign is an exploration of femininity,” said Simons in a statement. “A group of women bonded by a common thread, the desire to have the power to create their own identity and to support and lead the way for those that come after them.”

For the September issue of ELLE Canada, Nyong’o and Saoirse Ronan exclusively interviewed one another about their heroes and careers. See below for some of that conversation.

Lupita Nyong’o on set for the campaign.  Image by: Calvin Klein

On being the face of the scent:

“I was very excited to do a campaign with a brand that I felt I actually had a personal relationship with—I spent a lot of time with them when they designed two of my Oscar dresses,” Ronan tells us. “Raf has brought something so new and fresh to the brand—he is such an individual and has chosen his first fragrance as a way to celebrate and champion women. I thought [being a part of that] would be an incredible way to be involved with that family.”

“After [the brand] approached me to be one of the faces, I remember crossing my fingers and hoping that I would like the scent,” says Nyong’o. “I took one whiff of it and I felt such a relief, because I genuinely liked it. So I was thrilled to bits because I felt like really liking it would make it so easy to talk about and be associated with it and it was scent that I was looking forward to wearing. There is something very open about it: it’s fresh, it’s sensual. There is a free spirited nature to it that I really liked.”

Saoirse Ronan on set of the campaign with photographer Anne Collier.  Image by: Calvin Klein

On how women will feel wearing the scent:

“The beauty with perfume is that it always mingles with our natural scent to create something unique,” says Nyong’o. “So for me, the freedom and the free spirit that I smelled the first time I experienced the perfume is something that I would like to bestow on all the women that wear it.”

On wearing a scent for a role:

“With Mary [Queen of Scots], it was very, very important that when making a presentation in the court that she established herself as she wanted to be seen—whether that was a sort of mother earth figure or a warrior or a friend or a wife or a ruler,” says Ronan. “Fashion and scent were a huge part of that. One of the things that she used to wear was marigold—that was her family’s flower. I would imagine she would wear something like that; I always pictured her wearing something like rose water on her skin.”

Perfumers Annick Ménardo and Honorine Blanc combined notes of eucalyptus, orange flower and Alaskan cedarwood for a scent they say is “unlike anything on the market.” Calvin Klein Women Eau de Parfum Spray ($92 for 50 mL).

For the full interview, pick up the September issue of ELLE Canada, on newsstands August 6.