We sat down with Kirsten Dunst, the new global spokesperson for L'Oréal Professional, to chat beauty, health and the best advice she's ever been given. 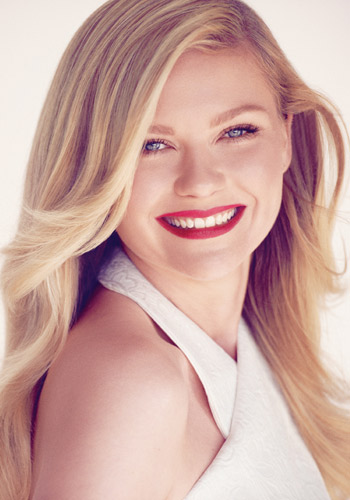 A weighty grey fog may be draped over Paris, but that hasn’t affected Kirsten Dunst’s mood in the slightest. When I knock on the gilded door of her decadent suite at the Le Meurice hotel, she swings it open and beams at me with a megawatt smile, her trademark left dimple in full effect. “I’m Kirsten! Have we met before?” she asks, extending herhand. A quick glance around the expansive space reveals not a single handler or publicist in sight—just Dunst, clad in a black crepe dress and holding a glass of still water, which she sips throughout our interview.

Her makeup is polished and minimal (so French), while her sunflower-blond hair is spilling over her shoulders, set in soft and tousled waves. The American actress is in the City of Light to formally announce her latest role—not for a new film (although she has the thriller Two Faces of January hitting theatres later this year) but as the first global spokesperson for L’Oréal Professionnel. We settle into two Louis XV wing chairs to chat about her outlook on beauty, health and growing up in Hollywood.

Hair history “I’ve actually been lucky with my hair. I’m someone who can take a shower and crunch it a bit and it’ll have a little wave. I’ve never coloured by own hair; I’m not that stupid! When I was little, my mom would go to José Eber in Beverly Hills and her hairdresser would let me help mix the colour for her. I’d get two highlights [gestures to the crown of her head and laughs] and think it was so cool. But with working so much, my hair has been fried so many times. It always changes.”

Top line “My skincare routine is really basic; I go to a facialist in L.A. who told me that if you can’t understand everything listed on the ingredients label on your face product, then you shouldn’t use it. Right now I’m using an oil from Isun and a moisturizer from Derma E.”

GALLERY: The best celebrity hairstyles of all time

Secret service “The best beauty advice I’ve ever been given is never wash your face in the morning, because you don’t need to. I’ve also heard that you should wash your face with cold water only; it de-puffs and tightens your skin. My girlfriend, who travels a lot, fills an ice bucket with cold water and ice and leaves the washcloth at the bottom.”

Body shop “I feel like I lose a little weight when I’m working because I eat more regularly on set. Sometimes I don’t eat breakfast when I’m not working, and we all know it’s good to eat breakfast to kick-start your metabolism. But I was so stressed when I was shooting the nude scenes for Melancholia that I just naturally lost weight. When I don’t work, I don’t care as much.”

Numbers game “When I turned 30 [two years ago], I did have a little moment where I was like, ‘I’m not going to be pretty anymore, everything’s based on youth, it’s all going downhill from here.’ But I quickly recovered. It is what it is—it’s fine.”

Beauty crush “When I was younger, I would crush those Guerlain pearls [Guerlain Météorites Light Revealing Pearls of Powder in Blanc de Perle, $63] in my hands, playing with them and smelling them. I definitely played with my mother’s makeup.”

Barre none Although Dunst has worked out with Tracy Anderson in the past, she’s currently into the DVD system from Ballet Beautiful. “The Swan Arms [in the program] are really hard!”