These leading ladies caught our attention this year and are poised to be the next big celebrity beauty stars. 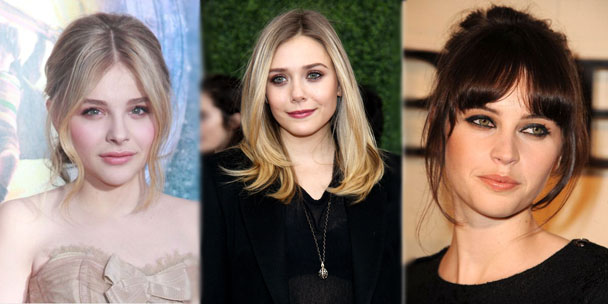 Every year, a new crop of female celebrities establish themselves among the ranks of the most beautiful, however it takes a keen eye and distinct sense of self to transform that beauty into true red carpet magic (with a few celebrity beauty secrets too, we’re sure). Here, we present our top five celebrity beauty stars of 2011: The women whose beauty, style and confidence work in concert to set them apart.

This striking copper-haired beauty (and ELLE Canada September 2011 cover star) first raised eyebrows as a relatively unknown actress opposite Brad Pitt in the critically acclaimed art house film
Tree of Life. Her raw performance and dazzling red carpet appearances thereafter quickly established her as one of our top celebrity beauty stars of 2011. And who could forget her turn as the curvy, platinum-haired and lovable Celia Foote in
The Help?

We love how Chastain balances her red carpet looks by playing up just one of her features. At the
Tree of Life premiere at the Cannes Film Festival, her
bold red lips, soft eye makeup, luminous skin and tousled curls were the perfect mix of both pop and polish. Not one to be edged into a beauty corner, Chastain upped the ante by rocking serious kohl-rimmed eyes with a neutral lip at a screening of
The Debt in New York this past August. And she dazzled at TIFF, with her signature red hair, killer cheekbones and petite frame securing her spot on many best-dressed lists.

It seemed unlikely that the Olsen clan could produce another talented, fashion savvy starlet but it happened again in the ever-graceful Elizabeth. In her breakout role in
Martha Marcy May Marlene, Olsen’s character was a barefaced blank canvas making her promotional appearances for the film all the more striking. At the Cannes Film Festival, she was the picture of bridal perfection in an ethereal number by The Row paired with wavy, minimalist hair and glowing makeup in pinks and taupes. This fresh-faced beauty trendsetter is at the beginning of her career and with thoughtful choices in film, fashion and beauty, she’s likely to stay at the top of our list for years to come.

Want to know about celebrity beauty secrets? We ask the pros.

More breakout celebrity beauty stars we love on the next page …

Chloe Moretz played the precocious, affable kid sister in
(500) Days of Summer, but fast forward a couple of years and Moretz has emerged as a savvy 14-year-old with big girl style. She’s been seen at Hollywood events experimenting with both fashion and (age appropriate) minimalist makeup, not to mention her enviable thick blonde bob that shines on the red carpet. With this kind of potential at the onset of adolescence, we can’t wait to see what’s in store for this beauty ingénue.

As Mark Zuckerberg’s short-lived girlfriend Erica Albright in
The Social Network, Rooney Mara’s star began to rise and will most certainly explode as she becomes Lisbeth Sander in David Fincher’s take on
The Girl with the Dragon Tattoo. With the hard-edged character of Sander behind her, Mara has certainly proven that she holds the power of transformation; a rare quality in Hollywood that we look forward to watching blossom over time. Equally beautiful with her natural, long brunette locks or the jet black,
baby-banged razor cut of her breakout role, Mara is certainly one to watch.

If you’ve seen
Like Crazy (perhaps the most talked about love story since
The Notebook), you’ll certainly remember this hazel-eyed British beauty. Jones has a look so quintessentially English Rose (and the acting chops to boot), that she’ll surely follow in the footsteps of those that came before her like Knightley, Weisz and Winslet. At the New York premiere of
Like Crazy, Jones was a vision in an ethereal Dolce & Gabbana print from spring/summer 2012 with her hair softly pulled back off of her face, showcasing one of her best assets; her
flawless, porcelain skin (Jones was also just named the new face of Dolce & Gabbana cosmetics). With an honours degree in English from Oxford University, this beauty has serious brains too — a powerful dynamic that will set her up for a winning career in Tinsel Town.

Over the past year, we’ve seen many
Hollywood beauties walk the red carpet in gorgeous couture gowns and professional hair and makeup, but it takes an innate sense of confidence and grace to transform these looks into true show-stopping style. In our top five beauty stars of 2011, we have the elegance and regal appeal of Jessica Chastain, the fashion-focused beauty and poise of Elizabeth Olsen, the budding beauty in Chloe Moretz, the transformative potential of Rooney Mara and the classic English Rose: Felicity Jones. We’ll keep a close eye on our top five to see how their individual styles evolve in 2012, and how the competition stacks up as we head into Hollywood awards season.