Abstract art: The creation of Chanel No. 5

When is a rose more than a rose? Chanel explores the enigma. 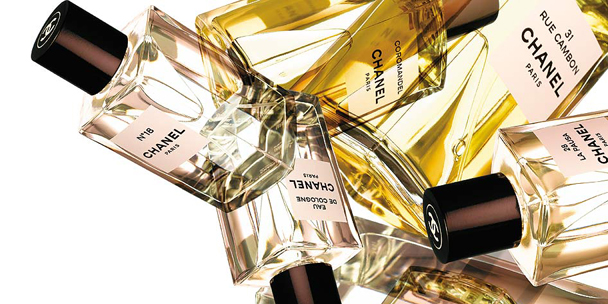 Earthbound clouds of pink roses de mai turn their round faces toward the morning sun and then – snap! – another fragrant flower head topples into a willow basket, joining the thousands of others destined for a splendid reincarnation in the world’s most successful perfume. The only reason that this family-run flower farm in Grasse, France, hasn’t been converted into a compound for some wealthy Hollywood actor is the beneficence of Chanel. But perhaps the company’s interest is driven less by nostalgia for la bonne nature and more by its desire to secure dibs on the glorious, hand-harvested roses that are employed to such great effect in Chanel No. 5.

Chanel No. 5 was the first fragrance to be marketed by a designer using her own name. In 1921, Coco Chanel hired Ernest Beaux – formerly a perfumer at Rallet in Moscow whose clientele included the czar of Russia – to create the scent as a parry to her despised contemporary Paul Poiret. Poiret (who must be credited, however, with initiating the concept of the couture fragrance as fashion accessory) favoured exotic scents with names like Forbidden Fruit that were ideal for indolent bedroom escapades, so Chanel demanded that Beaux create a “composed” scent to which she would simply affix a number – the way one would give a model number to a car.

The fragrance, she declared, should have several characteristics: It must be truly French (rose de mai and jasmin de Grasse), mysterious and costly (“more of that expensive jasmine, tout de suite!”), and it must appeal to many women but each in a different way. Mademoiselle Chanel loved to juxtapose opposing elements: fine jewels worn with costume baubles, couture derived from convent uniforms, women wearing menswear, and an expensive women’s fragrance – housed in a square crystal bottle inspired by men’s aftershave – in which rich natural ingredients commingle with cutting-edge synthetics.

In his essay “In Praise of Cosmetics,” French writer Charles Baudelaire argues that perfume, fashion and poetry share the same goal: “to invent an ideal that surpasses Nature, that lifts men and women above Nature.” For Beaux, it was the invention of aldehydes – a family of organic compounds that exude rosemary, lemon, orange peel and “fresh air” notes – in 1903 that made Chanel No. 5 possible. Indeed, it was the first important fragrance that blended naturals and synthetics. “We’re not in competition with nature,” says Jacques Polge, head perfumer at Chanel since 1978. “You could never produce the smell of your garden’s old roses; instead, you have to add mystery to the composition and find an equilibrium between too much mystery and too little.”

When synthetics were first introduced in the early 20th century, they were met with a hostile reaction due to their high cost and people’s nostalgia for a lost natural paradise. It was only when perfumers reframed themselves as artists who compose with a variety of notes that the era of modern perfumery gained momentum. “It’s not about synthetics or naturals,” says Polge, “but having the freedom to choose. You need both to make a great fragrance.” For Polge – who created Chanel No. 5 Eau de Parfum in 1986 and, more recently, Eau Première, a vivacious interpretation of the original-working on Chanel No. 5 is “more of a technical problem than an aesthetic one because it has already been created. You never get bored with her.” Does he solve the technical challenges mentally or by creating samples in the laboratory? “The creation of the fragrance is all in the mind,” he says. “Yet I’m glad we’re not called ‘brains.’ Calling us ‘noses’ is easier to bear.”

This article is dedicated to the memory of Roger Forcier.