"She gave me a fake number." 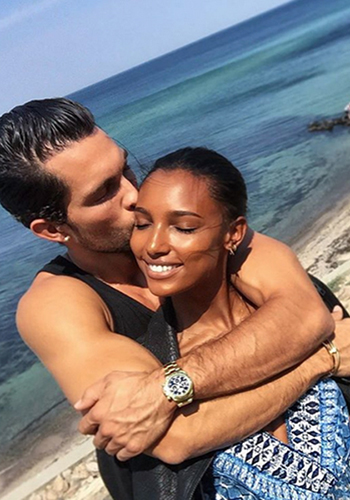 1. Because this is how they met:

Tobias: We met in a club…

Jasmine: We were both staring at each other.

Tobias: [Agreeing]. We were both staring a lot. I went up to her, maybe I had a friend with me, I introduced myself, and I think that was pretty much it. We talked for a minute or two, then I went back to my friends. We did a little more staring, and before I left – I left pretty early that night I remember – I went up to her and asked her if I could get her number. I said I would like to take her out for coffee…now I know she doesn’t even drink coffee! She gave me a fake number.

2. Because Jasmine’s response to a (then) stranger asking for her number is exactly the same as ours:

Jasmine: Whenever I’m single and a guy comes up to me, I give them a wrong number. I feel bad saying no, so I just give them my friend’s number. But with [Tobias], I was single at the time and said no…then he came back around and I go, “I think I put the wrong phone number in – I need to check it!”

3. Because they played hard to get:

Tobias: [Our first real date] was, like, two months later. We met maybe two or three times just out with friends in between the first time we met and our date, but we texted, like, every three days. But before that, it was about a month or so, because I would text her and it would take her, like, three days to reply. Then I would get mad and not reply until four days later. Eventually we went out – we had dinner, we went to a bar…

Jasmine: We went to the Dream hotel [in New York].

4. Because they star in the latest Calvin Klein Eternity Now campaign, which looks like this, and it’s basically just their real lives:

Jasmine: [Filming] was so much fun, we got to be very comfortable and it’s always great to work with Tobias on a job. It was just a look into our daily lives, so it felt very natural.

Tobias: It was easy not to fake anything, the chemistry was there. It just felt way more natural to do it with your partner. We’ve done a few editorials together, but this was our first campaign together.

5. Because Jasmine is the chillest dresser and Tobias likes to coordinate his outfits with his hair, and they’re cool with that:

Jasmine: I think Tobias takes longer than me [to get ready].

Tobias: I say her, she says me.

Jasmine: I would say before going out, I like to take a solid 30 minutes. [Laughs]. You take about an hour.

Tobias: Whatever! Sometimes the hair has to match the clothes…

Jasmine: I think I’m just easier. When I go out, I throw on a dress and black heels, or black jeans and a black shirt, whereas he pays more attention to his outfit.

Tobias: I’ll admit, I do care about [what I look like] when I go out. Jasmine is very nonchalant – she’ll just put on her gym clothes and walk down Broadway. I’m the same way, I can put my sweatpants on and a hat – but you never know when you might meet people, there’s so many potential clients, we all live in the same neighbourhood.

Jasmine: I swear whenever I am walking around Soho and someone comes up and recognizes me, I’m always in sweatpants and my hair is in a bun, or I’m in my workout clothes when I have not even gone to the gym.

Tobias: She does that a lot!

READ MORE:
How to contour for real life
Is dry shampoo destroying your hair?
7 beauty secrets from Gisele’s makeup artist