What trends to nix and what to add to your beauty repertoire in the New Year. 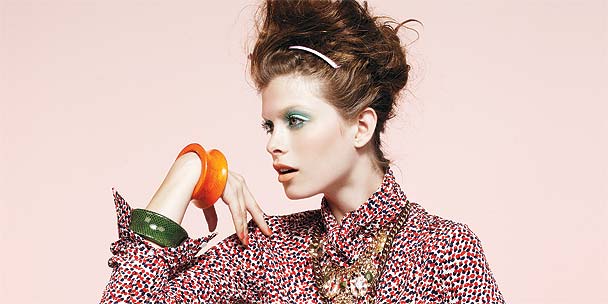 With the change of every calendar year we breathe a collective beauty department sigh of relief. It’s the perfect opportunity to escape from some of the worst beauty trends of months gone past; 2010 is no exception. With dozens of beauty blunders behind us, we’ve selected the top three looks to nix come the new year – and the top three tips to add to your beauty arsenal.

Where it’s been seen: This look appeared on many a star in 2010, including Taylor Momsen, Fergie and Carmen Electra.

Nix it now: As unflattering
eye makeup goes, this look may surpass all others. Yes, eyeliner – when used in appropriate doses a la Nicole Richie – can make eyes pop. But there’s a fine line between sexy and trashy, and it can be a hard one to walk. Straddling the wrong side may have the unintended effect of detracting from – rather than enhancing – your face’s beautiful features.

Where it’s been seen: Dozens of spring 2011 runways had their share of prettily coloured eyes, including Betsey Johnson, Etro and Narciso Rodriguez.

Add it now: This is a trend anyone can tailor to their own makeup wants and needs. Eyeshadow shades can be matched to complement skin tone and eye colour. And it’s easy to take this look from day to night; just add an extra dash of eyeshadow or eyeliner to give eyes that extra pop. Standout colours include lavender, lime and aqua.

Where it’s been seen: Victoria Beckham, Lindsay Lohan and Snooki have all been spotted sporting an “orangey” glow.

Nix it now: There is nothing sexy about looking like you’ve overdone it in a tanning salon – or like you refuse to wear sunscreen when sporting a bikini on the beach. Tans to this degree usually make a person look leathery and aged, instead of young and graceful.

Where it’s been seen: Emilio Pucci, Dolce & Gabbana and Louis Vuitton made this simple look the staple of their 2011 spring runways.

Add it now: A timeless trend, this is another beauty look that suits absolutely everyone. The key is in learning how to apply makeup so it looks like you don’t have any on. A little concealer (under the eyes and around the nose) is all you really need, along with a sweep of foundation that matches your natural skintone. Leave lips bare – adding only a dab or two of clear lip gloss – and apply a coat of mascara to eyelashes. If you’d like some added colour, brush some blush onto the apples of your cheeks.

The biggest hair trend to nix on the next page …

Where it’s been seen: The runways of Alexander Wang, Acne, Jonathan Saunders and Cushnie et Ochs.

Nix it now: We love the fashion-forward items of the above designers, but we can’t say we approve of the hairstyles they sent down their runways in 2010. While greasy, grimy hair does have its place amongst the hipster set, it’s just not something the average fashion-loving person can pull of (imagine showing up to a board meeting with hair that hasn’t been washed for days?).

2011
Adopt this tip: Forget fussing with your locks

Where it’s been seen: The runways of Rodarte, Peter Som, Thakoon, BCBG and DKNY all had more than manageable manes on display at their runway shows.

Add it now: Elevated ponytails, centre parts paired with unstraightened strands and knotty buns were just some of the wearable hairstyles featured on 2011 fashion week runways. Braids and beach waves were also heavily showcased. There was a sense of anything goes – as long as the look is not overworked or developed with too much product. Which makes easily fashioned hairstyles de rigueur in the new year.

How to get flawless foundation