London-based designer and knitwear master Mark Fast reveals the secrets of his childhood menagerie, why he wants to show in Canada and his thoughts on the plus-size model trend. 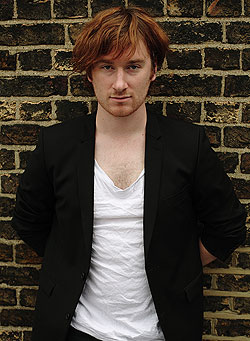 Though he now lives and works in London, Fast grew up in Winnipeg and like the rest of us, spent many hours watching Fashion Television and Fashion File. “I was very young, maybe 12 or so, but there was something about the catwalk that I was very attracted to,” he says. “There’s something almost movie-like or dream-like about the shows and I knew I wanted to be a part of that world.” His love of fashion took him from Winnipeg to Toronto and eventually to Central St. Martins’ elite fashion design program in London, which has produced such design legends as John Galliano, Phoebe Philo, Zac Posen and the late Alexander McQueen. “While I was in the foundation course my tutor noticed that a lot of my work was very textural and suggested I apply to the knitwear course,” says Fast. “It was all new to me but I happened to find a knitting machine at a charity shop right next to my house so I started with that and I still use it now.”

These days Fast is busier than ever, working on a new diffusion line appropriately named Faster as well as his Topshop collection, all on top of his own line. Amid the chaos, he graciously took time out to tackle our infamous Designer DNA questionnaire and in the end dubbed it: “the funnest interview I’ve ever had!” Read on to get to know to softer side of the man behind the sexy knits.

What is your idea of perfect happiness?
A peaceful, restful life.

What do you consider your worst trait?
I don’t use my bike enough. It’s very tempting to take the bus or a cab…but bike is where it’s at right now.

If you could choose an occupation other than your own what would it be?
I’d love to breed animals, like exotic birds or ostriches. I used to raise chickens, hens, guinea pigs and ducks all in the same greenhouse in my backyard—it was my menagerie! I loved seeing the process of the egg to the young chick to the older bird—it was just so rewarding. I really wish I were working with animals still. Maybe that’s why I make dresses for my birds….

What is Fast’s greatest extravagance? Find out on the next page…

If you had to choose one designer to fill your wardrobe, who would it be?
Yohji Yamamoto, for sure. He’s got great clothes for guys—nice drape-y vests, relaxed trousers and nice t-shirts.

When and where was your last vacation?
When I went home to Winnipeg in April and I was stuck there because of the volcano. I was actually really happy because I got to spend more time with my family.

Which words or phrases do you most overuse?
“When in doubt, stretch it out.” Because I work with lycra so much! Is that weird?!

What is your most treasured possession?
My sensitivity. Life is just so fast-paced and there are just so many opinions, so much noise out there…I’d rather hear the whispers, and in order to do that I need to be sensitive to that.

Any tattoos?
No, but when I was a child I wanted angel wings tattooed onto my back—I don’t think that’s gonna happen.

What is your greatest extravagance?
A taxi ride. I think that’s my biggest luxury. I never buy myself anything.

Fashion trend you wish would disappear?
Oh, yes! Please, let me tell you! Okay so—oh, they’re awful—those fake fur bootie boots! You know, they look like you’re walking in stuffed animals?! Ugh, I just want to be sick when I see those.

Thoughts on the plus-size model trend—do you think everyone’s just jumping on the bandwagon?

In fashion for some reason, I don’t know, sometimes designers use the same colour at the same time, or the same silhouette—there’s some kind of hidden mystery in fashion where we all sort of start thinking alike. It’s just about picking up on what’s in the air and I think a lot of people are catching onto it.

Thoughts on the Canadian fashion industry?

There is so much creativity in Canada and it’s really such an interesting scene. When I was in Toronto I saw a lot of
designers doing great stuff that I haven’t seen even in London. Like I went to Joeffer Caoc’s show and it blew me away! I hope to be able to show there at some point—maybe, get all of us Canadians back over? Erdem, Todd Lynn, Jean-Pierre Braganza, we’re all out here.

What’s the biggest lesson you learned this past year?
Pay your bills on time.

Having a coffee in the morning, maybe going to a nice church service, going for a walk in the park and then having dinner out.

What do you value most in your friends?

A sense of humour.

I’m not on it but I think it’s a great form of marketing. I’d probably just get addicted and never talk to anybody because I’m telling everyone everything on Twitter.

Live in the mountains in Vancouver and have a little ranch, maybe raising animals or just having them around. It could be a little hobby.

Man up: We love men’s style

Street stylin’: Favourite cities and their most fashionable residents

16 Sweaters to Keep You Warm and Stylish This Winter Season

Oversized, playful, preppy or sporty, we've narrowed down our 16 favourite cozy knits to take you through winter.

Fashion: There’s No Hiding Behind These Attention-Grabbing Tapestry Prints

This winter, channel the more-is-more approach with ornate and patchwork patterns. Here are some hero items to start with.

Who doesn't like a good end of year deal? These 15 brands just slashed prices on their outerwear. Here are their can't-miss styles.

Le Château Is Going Out of Business

Get on the Nobis x Serge Ibaka Collection Waitlist